Ever had a night out at a nice restaurant or bar and been somewhat shocked by your bill at the end? You’re sure you didn’t order that last round of drinks and if you did, that definitely wasn’t the price advertised at the bar!

Most of us have had this kind of experience and while shocking and unfortunate, there are bigger, badder types of surprise bills out there. Surprise medical bills can leave you much worse off than a miscalculated bar tab. It’s a hot topic among media and legislators, but, what does surprise billing really mean? And how can it impact you? See below for a quick guide to understand surprise billing and learn what steps you can take to fight it if it happens to you or a friend.

What is surprise billing?

Surprise billing occurs when you go to an in-network medical facility like a hospital or emergency room, but you are treated by an out-of-network doctor and you are billed for the services performed by the out-of-network medical professional. In other words, you did your part–you carefully shopped the happy hour special or in this case a hospital that is “in-network” and covered by your insurance. But while there, a doctor not covered by your insurance treated you. Your insurer will pay for all of the “in network” doctors and services but you, the patient, will be billed for the “out of network” doctors that treated you.  Surprise bills occur most often during emergency care or if you are undergoing a treatment or surgery that may require additional physicians like radiologists or anesthesiologists that you do not actively select. In these cases you may not be aware you are receiving services from an out-of-network doctor. Surprise billing can also happen if an in-network doctor unknowingly refers you to a doctor or specialist that is out-of-network.

Check out a few of the gripping patient stories that sparked national attention around surprise billing:

How common is it?

A Health Affairs study found that one in five in-patient Emergency department admissions led to surprise billing. In other words, one in five people who went to the ER and were admitted to the hospital received a surprise bill.  The research institute NORC at the University of Chicago    found that out of 1,000 people surveyed, more than half had received some kind of surprise bill that they thought their insurance would cover. The surprise bills were most often for physician services but other surprise bills covered lab tests, facility fees, imaging, and prescription drugs.

What should you do if you receive a surprise bill?

Don’t pay the bill – If you think you’ve been overcharged or charged for services that should be covered, do not pay the bill immediately. Take the time to look at the bill and compare it to your explanation of benefits (the summary your insurance company should mail you or provide online that is separate from the bill sent by a medical facility). Through your insurance portal, you can see the insurer side of medical claims and look to see how much your insurer paid for a service.

Source: CMS.gov. Click here for a more in depth description of an Explanation of Benefits.

Get an Itemized Bill – If you didn’t receive one already, ask for an itemized bill that breaks down where the costs are coming from. Call your insurance company’s helpline to talk through how the bill compares to what they’ve already paid for. 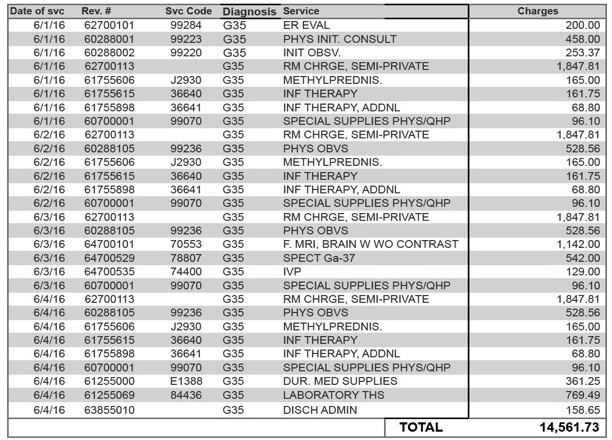 Cost Compare – You can also get more context on your bill by doing research on the average or typical cost of your medical procedure. Below are some tools you can use to cost compare:

Keep Notes & Self-Advocate – Keep diligent notes of who you talk to at your insurance company and the hospital.  Most of all, be prepared to be aggressive and persistent. Plenty of news stories show that if an insurer or hospital is put under the spotlight they will buckle and lower your bill. While you might not be able to garner national media attention, being your own advocate and pushing back should help you resolve the issue.

Shouldn’t this be illegal?

At this point, you’re probably asking yourself how this type of billing is allowed. How are you as a healthcare consumer supposed to know if someone treating you real time will be covered by your insurance?

Some states have taken steps to protect patients from this kind of outrageous billing. The Commonwealth Fund reports that 15 states offer partial protections from this practice, 6 states have comprehensive protections, and 29 states do not have any laws in place. You can look through Commonwealth’s guide to understand your own state laws. You may be able to use these laws for your benefit to fight a surprise bill.

Federal law is also critically important on this issue. As Health Affairs explains, state laws do not apply to the roughly half of privately-insured Americans that are enrolled in so-called “self-insured” health plans that are common among large employers. “Self-insured” plans are a type of plan when your employer collects premiums and takes on the responsibility of paying your medical claims. However, you may not know you have a “self-insured” or “self-funded” plan because many large employers contract with insurance services making the insurance look and feel like a traditional, fully-insured plan. The good news is that states and the federal government are beginning to turn their attention to this devastating issue.